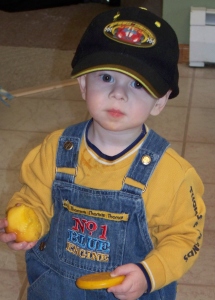 Samuel was diagnosed with FPIES at 11 months; although he had been sick for months prior to the diagnosis. Samuel is our 4th child; two of our other boys had milk protein intolerance’s so when Samuel started to show sensitivities through my breast milk, (gassy, “colicky”, spit-up, projectile vomit, loose stools, and disturbed sleep) we concluded that he had the same troubles with milk. A trial of a milk-based formula confirmed this, and his symptoms continued to worsen. We tried several things to control symptoms including the addition of rice cereal to his diet.  He seemed to tolerate this for a while; but then started to refuse it, had increased spit up, fussiness, disturbed sleep, increased reflux. This was the course of things for the next few months- every effort we knew of to control his symptoms, resulted in him getting progressively worse.

We consulted our pediatrician at 6mo.; with a referral to GI shortly after when he began to fall significantly on the growth chart despite an elimination diet. He underwent his first scopes, which ruled out Celiac disease and Eosinophilic Esophagitis, but did find non-specific inflammation and lymph nodular hyperplasia. With the advice of his doctors, we took him off of breast milk and all foods and put him on a strict elemental formula-only diet. This allowed the picture to become clearer; however for Samuel, this again caused him symptoms; although he did stop losing weight.
Samuel stayed exclusively on the elemental diet for 2 mos., often still getting sick. Despite this, we were advised that his intestinal inflammation had time to heal and that we should re-start him on foods. We started with rice….because no one is allergic to rice, right? We quickly got our answer after a tiny handful of organic rice puffs brought on the acute reaction. Even after recovering from the rice reaction, Samuel continued to be sick on the elemental only diet. We were advised to keep trying introductions, but he would vomit so violently – this retching- stomach-emptying-vomiting was un-nerving.

We knew something was horribly wrong…but our local specialists couldn’t help because no one had heard of this thing called FPIES, his doctors did not understood what was happening to him, or that it could be from the very things that were supposed to be nourishing him.

We traveled to a specialist and finally got the diagnosis of FPIES. We determined his allergens at this time were milk/soy, rice and corn. This new allergist advised he would continue to be sick if we did not remove and avoid his triggers from his diet; and the reason he was still so sick is because he was so sensitive to corn, he was even reacting to the corn syrup in his formula and medications! These ongoing cycling of symptoms: the mucous/bloody diapers, the continued vomiting, the refusal to eat, the inflammation in his intestines….would not stop until we removed all traces of his triggers from his diet.

We immediately learned all forms of his allergens and removed them from his diet, finding safe alternatives.  It took a long time for his diet to be complete enough without formula, even requiring IV nutrition (TPN) twice.  When he was 2.5yrs.old, the decision was made for him to get a feeding tube.  He is now 5yrs old and thrives because of his G-tube with his blenderized bolus feeds of his, still very, limited diet. His FPIES has a lot of chronic symptoms with reactions to foods.   He also has a generalized disaccharide deficiency (carbohydrate intolerance’s).