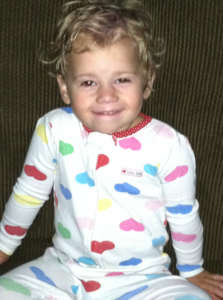 Riley was a beautiful, healthy baby who loved to sleep, much to her parents delight, when she was first born. She was much smaller at birth than her sister had been and she was nicknamed “bean” almost immediately. Riley was bottle feed from birth but with breast milk for her first month. I had some difficulty with breast feeding and eventually moved her to formula, just as her older sister was. Almost immediately we noticed Riley was in a lot of discomfort right after she was given a bottle, her bowel movements had a very off smell to them and were very runny. After talking with family and the doctor I was told to put her on soy based formula to see if it helped– it did not at first. We put Riley on Alimentum Hypoallergenic formula and she improved. After 2 months our doctor told us to go ahead and try her on soy formula and she did great.

At about 5 months I started Riley on solids, starting with rice cereal and gradually increasing her variety. Since we believed her to have a dairy sensitivity or allergy I avoided anything with dairy in it. Around this time I started to notice Riley’s eyes did not look “right” to me. Her left eye had always been a little droopy compared to the right but now they were starting to swell both above and below her eyelids and at times appeared to be black and blue. Riley had also started with a massive diaper rash that no matter what I did, I could not get under control. Even prescription crème did not help and she developed severe exema all over. Our pediatrician recommended changing diaper and diaper lotion to see if that helped the rash. We switched and within 1 day the rash was gone! I had never known a child could be allergic to diapers! We also learned that she had extremely sensitive skin and changing lotions and diaper crème’s also helped. We assumed we had a sensitive child on our hands. Our pediatrician was baffled by her eyes though, she asked us to document when we noticed symptoms, how bad they were, how long it lasted and to take pictures. She asked us to return when symptoms came back so she could see the discoloration. We had also asked about re-introducing dairy to Riley and if it would be safe. The doctor told us we could try but to keep a close eye on her.

A few weeks later we switched Riley from her soy formula to milk based. After one bottle she began to scream in pain. Then about 2 hours later she started to vomit profusely and it was projectile. My husband and I took turns holding her, cleaning up and trying to get fluids in her however, anything we got in her came right back out. She also started to have severe diarrhea, after about 6 hours I called the doctor who instructed us to take her to the ER. At the ER they treated her for a stomach bug, gave her IV fluids and sent her home. I followed up with my doctor who told me to out her back on soy and avoid dairy.

Our the next few weeks we noticed Riley’s eyes becoming worse our pediatrician still thought it was time to consult with an Ophthalmologist. I made an appointment at The Children’s Hospital of Philadelphia and took all my photos and notes. The Ophthalmologist did a complete exam; he did acknowledge there was puffiness and discoloration though he was not sure the cause. Of course, having an older sibling the thought crossed his mind some sibling roughness was a possible cause. That theory went out the window quickly as Riley had not been left alone with her sister and there had never been an incident that would have caused this. His only other explanation was a possible tumor behind her eyes, which he did not believe to be the case. However, I decided to move forward with the MRI to rule it out. They did not find any tumors behind Riley’s eyes, which was a relief. She was cleared from Ophthalmology. Over the next few months Riley’s eyes seemed to get worse and worse and new symptoms were developing. She would have unexplained raised rashes and fevers followed by bouts of very low temperatures. Her bowel movements were always a very odd, off smell and a lot of time would be watery with nothing solid to them. She also began to lose weight. We had no idea what was going on, she was not getting any dairy and we were regularly seeing of pediatrician who was sending us to Rheumatology and Immunology to try and figure this out. Once her weight went down they sent us to consult an allergist. When we saw the allergist he did a scratch test and went over all for Riley’s symptoms and appointments that she had over the last 10 months. The first thing he noticed was her symptoms started right at the same time food was being introduced and she was crawling. He explained allergies do not come out in the same form in every person or child. He diagnosised her with asthma based on her history and family history, he suggested her being placed on zyrtec to help with allergies to dust, molds, tress, etc. He then blew us away with informing us she had come up positive for allergies to beef and pork! We had been expecting milk! He explained that the milk could be an allergy based on her history so to avoid it but also take out beef and pork. The poor bean loved her hot dogs! He also suggested that we take her off all food until her bowel movements returned to normal and to start with food introductions one by one.

After a few days of being solely back on formula (which she did not mind at all) we noticed vast improvements, her eyes looked wonderful, he bowel movements were back to normal and there were no more fevers or rashes. At this time, I also switched jobs which put me in touch with a nurse practitioner who worked in allergy at Children’s Hospital. After speaking with her one day and explaining Riley’s reaction to milk, she mentioned FPIES to me and a doctor that specialized in that area. I immediately made an appointment. When I went to the appointment I had already begun to re-introduce food to Riley and had concerns about chicken and potato. I had noticed when I gave Riley anything with chicken or potato in them her eyes seems to react within a few hours, she’d seem uncomfortable and her bowels would be off. It was hard to tell if it was food based or a stomach bug since it was winter. The new doctor did a patch test on Riley and she came out positive for milk, potato and chicken. We learned she had anaphlaxsis reactions to egg, beef and pork and FPIES reactions to dairy, chicken and potato. I felt so relieved were we finally figuring all this out but horrible I had been feeding Riley these foods without realized they were causing her so many issues.

We introduced egg to Riley next and this was a heart breaking day. Riley got severely sick about 3 hours after consumption– she refused drink, she was vomiting, had the watery bowel movements and her lips turned blue. I am not sure if this was due to a temperature drop since that had been one of her symptoms. We administered an Epi Pen and rushed her to the ER. The ER experience is another great learning curve, as they treated her for a stomach bug and not for an allergic reaction, even after I explained that she had FPIES and this was her first egg ingestion. After being released I was able to get into see out allergist who did a scratch test and egg came up as her most severe allergy. Due to her type of reaction her allergist also determined she has both anaplaxsis and FPIES reactions to egg.

Since then we have learned that Riley is allergic to milk, beef, pork, chicken, egg, potato and peas (also FPIES). We have learned about reading labels and how since Riley is not only allergic to the 8 most common, we have to be careful of how items are listed. We have learned family and caregiver education is the most important part of our job as Riley’s parents to ensure her safety. We carry a binder with us with all Riley’s medical information including a letter from our allergist explaining her FPIES diagnosis and how they should treat her at the ER so that they do not just assume it’s a stomach bug. With the amount of her limitations our family does not follow the same diet as Riley but we have learned to be creative with her food choices and have found ways to have cake, ice cream, popsicles so that Riley can be included. We felt it was important for Riley, us , our family and her sister to learn what she can eat, get used to not giving her bites of food and for Riley to understand that she cannot have the same food at times.  We do try though to give her and her sister similar foods or the same snacks. It is a struggle to want her to be included but to also teach her that some foods will make her belly sick. For her 2nd birthday we had an allergy free birthday where everything there were Riley safe items that she could enjoy and it was so nice to have supportive family and friends that rallied around her and enjoyed her food with her!

Riley is now 2 ½ years old, we are still trialing some foods especially meats and vegetables. She is a lively smart girl who has even found some humor and learned to protect her favorite snacks from her older sister by telling her “it will Aubrey’s belly sick to eat it!” We are thankful for all our family, friends for their support and patience when we go crazy with making food or asking people to wash their hands or their children’s hands before touching Riley or toys to avoid cross contamination. We are thankful to the CHOP doctors who are helping us learn more and keep Riley safe. But we are mostly thankful for Riley and Aubrey, who have taught us so much about handling allergies. The proudest moments are when Aubrey helps her sister by telling others to please wash their hands or ensuring that Riley is only given food sent by mommy or daddy. She even had a sitter call us once to ensure she was allowed to have something. And Riley has been so brave and happy through all of her tests and appointments and has taught us so much about FPIES and food allergies– she is just a positive little person!