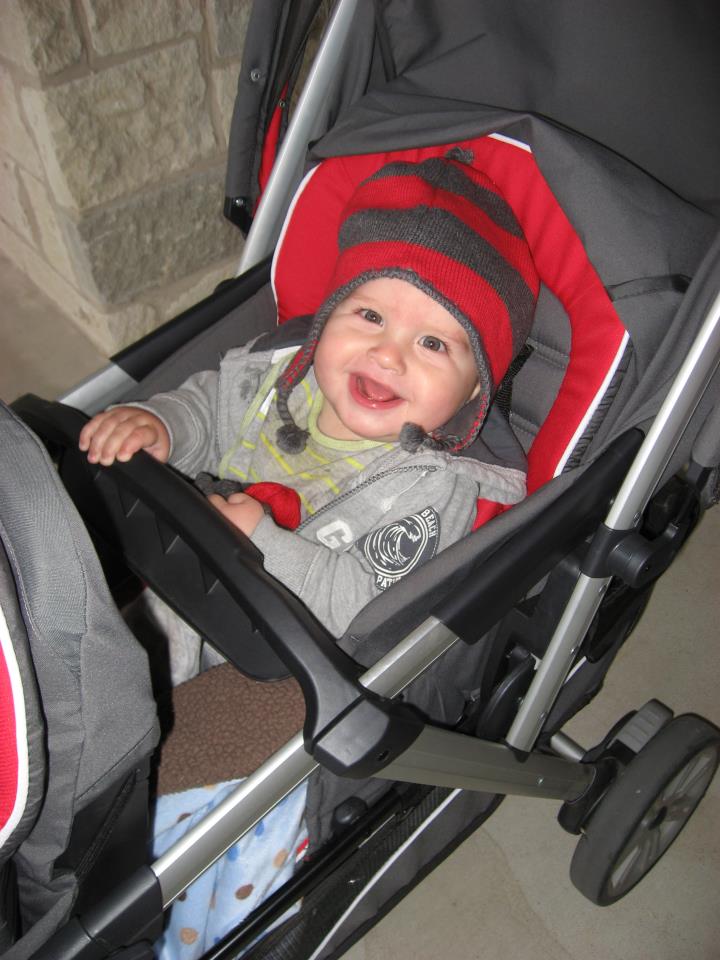 Matthew was six months old when he had his first FPIES reaction. He was exclusively breast fed until he hit six months, so we had no idea that anything could be wrong. His poop always had an odd smell – a “buttered popcorn” instead of the “yeast bread” smell that his big sister’s diapers had always had. They also looked different – instead of “seedy” they were more “stringy.” But all kids are different, so we didn’t think anything of it.  We started Matthew on rice cereal after his six month check-up. Four days into starting Matthew on solid foods my husband left to travel abroad for a two week business trip.

I was doing the “single parent thing” with two kids…fighting to get Matthew to “eat” rice cereal was the last thing I wanted to do, so it was put on hold. My sister-in-law came to help out for a week, and I thought she’d find Matthew’s “eating” fun, so I pulled out the rice cereal. Two hours after eating he vomited all over her – not so fun after all. He continued to vomit and dry heave in 5-10 minute intervals for two hours. Between dry heaves he would lay his little head on my shoulder and pass out. He didn’t have a fever, but he was really out of it, so I called the After hours nurse – she told me to give him little sips of water in five minute intervals until he could hold it down. It was a struggle to get him to wake up enough to sip the water…after two hours he had taken one ounce of water, and then he was passed out for the rest of the night. The next day he seemed like his happy self, other than four diarrhea diapers. I thought that the breast milk I had mixed with his cereal was the culprit, and decided to give Matthew’s tummy a rest and hold off on feeding him again until my husband returned. A week later when my husband was back we decided it was time to push the rice cereal again.

Matthew’s reaction was like clockwork. Exactly two hours after eating he started vomiting and dry heaving in 5-10 minute intervals again, passed out on my shoulder, and this time I couldn’t rouse him to get any water in him. I was worried and knew something was wrong, but since he had snapped out of it the last time I just laid him down for the night. I now know I should have taken him to the hospital to get an IV, but I didn’t realize he was possibly in shock. Instead, I took Matthew to the doctor the next day. I wanted her to know about his reaction to rice, but also that he had diarrhea and hadn’t made a wet diaper since before throwing up (he finally made a wet diaper at the doctor’s office, 19 hours after his initial reaction). In the mean time, I went to the computer and Googled “vomit rice cereal.” I found a page on BabyCenter.com with lots of parents worried about their kids vomiting rice cereal. There were lots of acronyms I didn’t understand on there and passed over – LO, DH, DD, FPIES, EBF, etc. The more I read the more I thought the posts talking about FPIES sounded like Matthew, so I looked up what FPIES was – it was like reading about my son. This HAD to be it, so I wrote down the name and symptoms to ask his pediatrician about the next day. When I brought FPIES up, the doctor immediately discounted it because of the word “colitis.” It wasn’t her fault, most doctors have never heard of FPIES…but I wish she would have taken a moment to look it up before dismissing it, because Matthew is a textbook case. We actually were lucky, with the week break from eating (due to my husband’s trip) we avoided having Matthew’s reaction labeled as a stomach flu. His pediatrician told us to definitely stay away from rice, but to move on to other foods.

So, we started foods again after giving him a few days to recover. We tried peas and he liked them…until day five when he started vomiting two hours after eating them. I called the doctor to ask her advice – she said Matthew was “sensitive” – to stop peas and to try him on sweet potatoes next. Bells and whistles went off in my head, because sweet potatoes are on the FPIES list. I went online to search again, and became more convinced than ever that it was FPIES.

So, I talked to my husband’s sister…her father-in-law is a research allergist. When she mentioned what was happening with Matthew she only got out two sentences before her father-in- law said “It’s FPIES.” My husband and I feel so blessed that we have a family member who could “diagnose” Matthew so easily. We still needed to find Matthew a doctor who lived in our area, but we were pretty certain of the diagnosis. I didn’t want to feel awkward again trying to explain FPIES to a doctor, so I called around – refusing to schedule an appointment until I found an allergist who not only was familiar with FPIES, but had patients with FPIES.

After scheduling the allergist appointment, all of my energy went into trying to find a food that Matthew could eat. I scoured the internet, reading journal articles and blogs…and then one of the blogs linked to a FPIES Facebook page. Where would I be without my FPIES Facebook family? They helped me choose Matthew’s next two foods – carrots and potatoes (he’s passed both). But I was still frustrated – all of the studies only had a handful of solid-food FPIES kids in them. Such a small number of kids meant a limited data set, and I wanted more data to help me choose Matthew’s foods and avoid possible triggers. So I came up with a survey to poll what foods the FPIES kids react to. The food list came from an old post on the BabyCenter site, and I posted the survey on both BabyCenter and Facebook the same day our allergist officially diagnosed Matthew with FPIES. Thanks to all of the parents who filled out the survey, I now have a pretty large set of data to base Matthew’s foods on.

I feel much more confident dealing with Matthew’s FPIES now. It’s still scary, and I still get that feeling in the pit of my stomach WAY too often, but I don’t feel in the dark when I’m choosing which food to trial next. My goal is to get him through these next few years hitting as few triggers as possible, until FPIES is in our past. 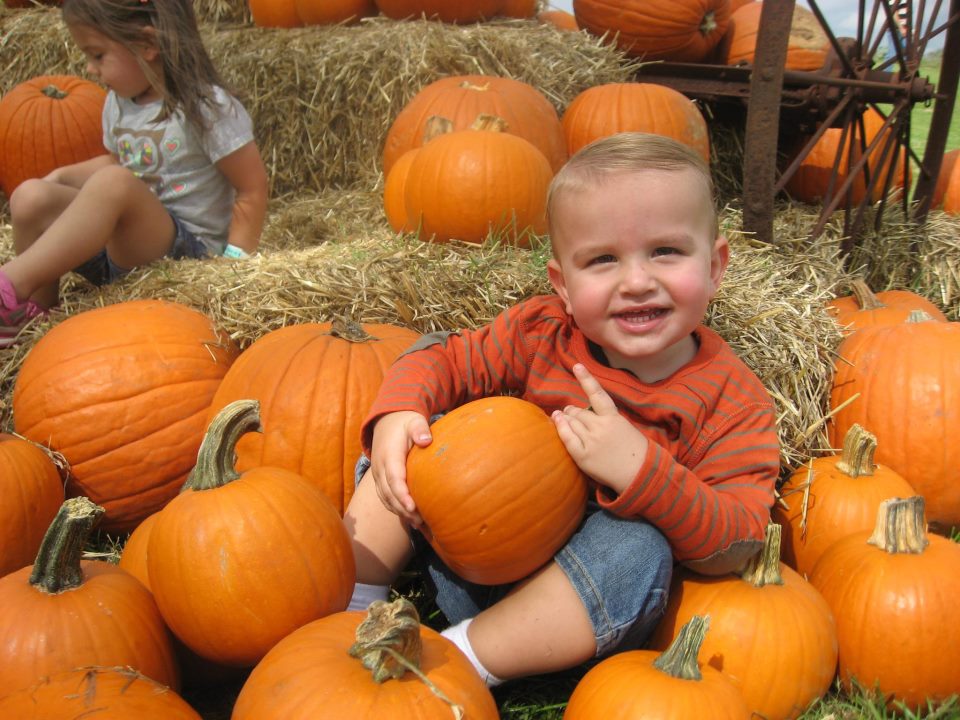 Matthew eventually had five triggers he had to avoid – rice, peas, coconut, venison, and dairy.  Dairy was his last fail, at 17 months.  His diet was extremely restricted based on his fails, because our allergist advised us to avoid any foods in the same food family as the foods he had reactions to.  So, based on his triggers, Matthew had to avoid grains, legumes, mammal meat, and dairy products.

Matthew also developed food aversions, which is pretty common among children with FPIES.  He refused to let us put any food in his mouth starting when he was 9 months old.  This made trialing foods impossible, because we couldn’t even get him to eat the 1 teaspoon of food required to start a food trial.  After spending over half an hour trying to get just one spoonful of food into Matthew’s mouth I broke down in tears.  We took him to occupational therapy for his food aversions, and it was the best money we’ve ever spent.  It’s been years, and we still remark on how amazing Matthew is at eating compared to where we were when he turned one.

We also had to keep Matthew on breastmilk/formula for longer than we had planned.  We worked with a dietitian to choose foods to trial that would give Matthew the nutrition he needed.  Thanks to our dietitian’s input, we were able to take Matthew off of breastmilk/formula and have him completely on solids when he was 22 months old.

Matthew is amazing.  He’s such a great advocate for himself.  He’s diligent about asking the adults around him “Is this safe for me?” whenever he encounters an unfamiliar food.  We make sure to take safe cake, juice, snacks, etc to any parties so that he won’t feel left out.  And Matthew is an amazing eater…he loves food and gets so excited when he can eat food at a restaurant with the rest of the family, instead of just having the food we bring him.  Matthew has come so far from the days when we had to take food from home for him wherever we went.

When he turned one, Matthew had six safe foods, and two triggers.  When he turned two he had nineteen safe foods, and five triggers.  At three he had over thirty safe foods.  After he turned 3 1/2 we started trialing foods in the same food family as his triggers, using this as an indicator to tell us if he was ready to start food challenges to his trigger foods at the allergist’s office.  Once he passed foods in the same families as his triggers, his allergist asked us to have him trial soy as one last step.  In October 2014, we took Matthew to the allergist for his first food challenge, and he passed!  He was so excited when he passed dairy…it was an awesome moment for our entire family.  We’re waiting to trial rice next, and hopefully he’ll pass challenges to all of his triggers in the coming months. 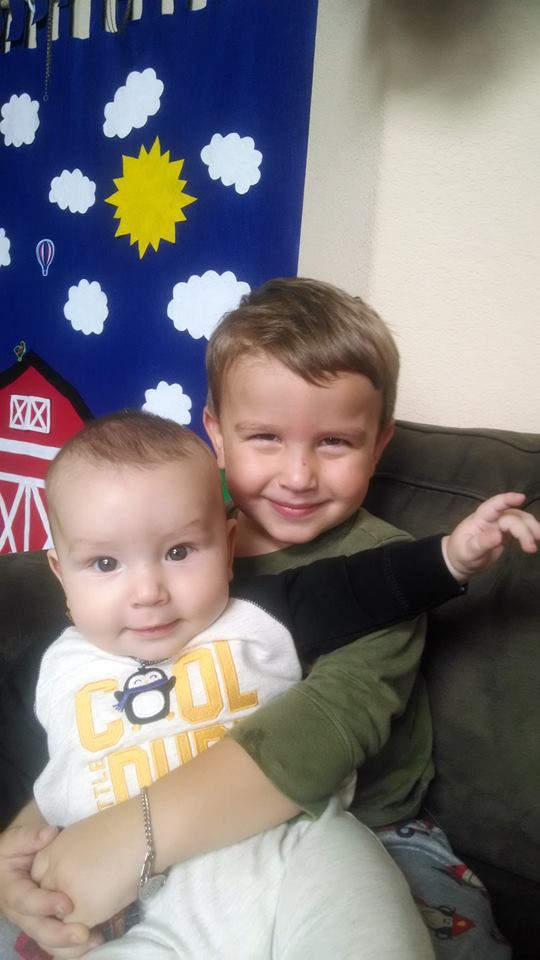