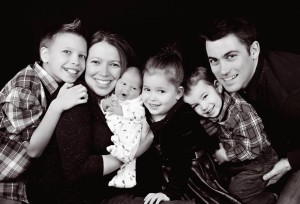 Yesterday, my sweet baby Aden was under the weather with a fever. It was not coming down naturally and he seemed uncomfortable, so I gave him some paediatric ibuprofen. I had the dye free formula, which he has taken a couple of times before.  I thought it was “safe”. The “natural” flavouring is often grain based. Most foods, drinks and medicines use a grain base to deliver “natural” flavouring and/or colouring. FPIES triggers generally take a few exposures for the allergy/intolerance/reaction to develop. We had hoped Aden would not be FPIES to grains like his siblings. FPIES is supposed to be rare, it is not supposed to run in families, and it is not supposed to have the same triggers for each family member. Several hours after I gave the medicine Aden started showing all signs of a FPIES reaction. Having been down this road with Lily and Liam, we knew time was not on our side. There are currently no test to identify FPIES. It does not present like a typical allergy and reactions are delayed by several hours. It is an IgG response rather than an IgE response, meaning skin test are not helpful. Diagnosis is made through food trials and medical history. The only treatment is to treat the presenting symptoms. In this case and most cases treatment involves intravenous fluid resuscitation (rapid fluid replacement) for hypovolemic shock; secondary to the mass amount of vomiting and/or diarrhea.

We rushed Aden to the children’s hospital and tried our best to get medical professionals to understand what FPIES is. We brought all the appropriate medical documents but it felt futile. We felt silently judged as “difficult” parents who did not want mainstream treatment. As we waited our turn in triage Aden’s body became more and more limp, he drifted in and out of consciousness, was pale, developing the classic small spread out red dot rash over his trunk and limbs. Every time we would try to rehydrate him orally he would thrash/arch, cry out presumably in pain, his stomach would ripple and then he would vomit large amounts of fluid. He had stopped passing urine; and his limbs were getting cold despite his fever. Our time in triage was long and not treated as a serious life threatening allergic type reaction. Even after going back to bring his changes to their attention, we felt dismissed.

Once admitted, the attending physician did not understand what FPIES was and challenged our information.  Precious time was lost explaining over and over what was really going on. Aden was subjected to a battery of invasive tests.  As a medical professional myself, I understand the need to look at all possibilities to rule out infection, but this was not my first rodeo.  I had come prepared with doctors letters, and provided a history.  My baby was presenting with signs of shock secondary to the FPIES reaction and he needed treatment fast!  Luckily the nurse was quick and skilled with the medical tests that were ordered.  She managed a quick intravenous start despite his body shutting down to rapidly replace a large volume of fluid.  Medication to stop the vomiting was administered intravenously. Collectively, we found a “safe” medication to bring down his fever (not an easy task).  As the intravenous fluid infused my baby slowly started coming back to life.  Once the medication for his vomiting kicked in he was able to keep in fluid by mouth.  After a while he started urinating again. As expected all his tests came back showing no signs of infection.

I am grateful we live near a world class children’s hospital. I am grateful that we were seen and eventually cared for. I am grateful that when we left maybe a few more people in the world know what FPIES is and how to treat a reaction. However, this emergency room experience was over six hours long. Only the last two hours were actual treatment. Today, Aden continues to cry out in pain on and off. His stomach still ripples and rumbles. He remains pale. He remains lethargic. He screams with elimination. He sweats in his sleep. Everywhere the rash appeared he has developed eczema.  He has burn marks from the “hypoallergenic” hospital adhesives in the most sensitive areas.  I am grateful my sweet baby is in my arms (hopefully recovering), but frustrated. I am frustrated with the lack of awareness of FPIES among health care professionals.  I am frustrated that the lack of awareness made our concerns feel dismissed. I am frustrated that this lack of awareness delayed treatment and could have been detrimental.

Please talk about it when the opportunity arises.  As much as I wish I could keep my children in a bubble, they will not be with me 100% of the time.  Their lives could depend on other individuals knowledge of this disease. Aden is eight months old, Liam is turning three years old, Lily is four years old. They all live with FPIES. Their triggers are: corn, rice, wheat, oats, and any other grain you can think of. These ingredients appear where you least expect it. Trace amounts can be hidden as “natural” flavouring and colouring. Their reactions have always been from trace amounts. If my children were to accidentally have a larger amount of grains, a reaction could be fatal. Reactions have not just been from ingestion. Animals we go to as a source of meat or dairy that have been fed grains can cause problems. As does absorption through toothpaste, shampoo, soap, cream, paint, markers, play-do, etc. Symptoms don’t stop with resolution of an acute reaction.  Our children live with challenging long term effects from every exposure.