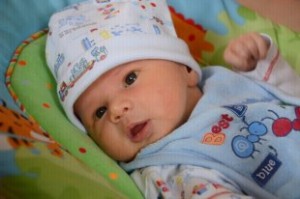 Chase was born the week before Christmas.  He was beautiful and my husband and I were so excited to be second time parents.  This time we were going to get it right!  I was going to breastfeed for a full year and all those first-time parent mistakes we made with our first son, we were going to learn from.  Those first days in the hospital were a dream.  Chase took to nursing naturally, I was so relieved.  The only weird thing, despite nursing non-stop he wasn’t gaining weight.  I didn’t think too much of it, but the doctors urged me to supplement with formula.  I was against it, but then another 3 days went by with no weight gain.  We agreed to 1 oz of formula a day for a few days to jump start weight gain.  5 days later, his weight was up and the formula was in the trash.  The only other weird thing was Chase stopped having bowel movements at 3 days old.  He went 15 days with only 2 bowel movements, and only after I did the “thermometer” trick.  The doctor told me not to worry, that this can happen with breastfed babies.  We were on our way to enjoying our happy, good sleeping baby.  Chase was 3 weeks old.

The next morning I woke up thinking the day before was a fluke.  Then, at 7:00am, Chase started screaming; it was a repeat of the day before.  I decided to try the car seat trick and loaded him into the car and went for a ride.  We drove for 45 minutes.  He screamed the whole time.  Again, I called my husband and asked him to come home.  He arrived home about 6 hours after Chase first started screaming, and found Chase sleeping peacefully.  I felt foolish, again.

The next morning I was determined to take control of the situation and decided we needed to get out of the house.  By 9:00 am a crying Chase was in the car seat, on his way to walk around the mall. I pushed his stroller around the mall, with him whimpering/crying the whole time.  I decided to nurse him in a department store’s nursing room.  As I nursed him, he decided to finally have a bowel movement on his own.  I was thrilled!  I finished nursing him and realized he had made a mess through all of his clothes.  I put him on the changing table, took off his clothes and then it happened.  He started spitting up blood.  Not the pink-tinged blood some breastfed babies will spit up.  Bright red globs of blood. My heart raced, what do I do?  Do I call 9-1-1? The doctor? My husband?  I knew one thing, it was January and the baby had no clothes on and couldn’t go anywhere like that. I got him dressed, rushed him out to the car and called the doctor first.  The nurse said to bring him right in.  I remember her words. “Are you able to safely drive?  You need to calm down so you can safely get him here.”

The doctor diagnosed him with severe acid reflux.  He said the blood was likely from an irritated esophagus from all of the reflux.  We started prilosec with instructions to bring him back if he spit blood again.

One week later, it happened again.

This time the doctor sent us to the hospital for an upper GI test to look for birth defects.  They found none.  We were referred to a pediatric Gastronenterologist and we saw her that same day.

The first thing she said was for me to cut milk and soy out of my diet because he likely had a milk/soy allergy.  I was so confused.  I told her he couldn’t have an allergy because he had no swelling, no rashes.  I also thought there was no way to have an allergic reaction through breast milk.  I didn’t know.  She explained that in rare cases milk and soy proteins through mother’s milk are too much.

I went on a strict milk/soy free diet and within 3 days we had a whole new baby.  I was thrilled!  2-3 weeks went by and then he started getting cranky again.  I figured I messed up the diet and I became even more strict.  No soy oil.  No soy lecithen.  No “natural flavorings.”

I went back to work when Chase was 3 months old.  I was pumping at work and still on my restricted diet.  The only major problem was Chase still wasn’t gaining weight.  A typical newborn gains about an ounce a day.  During a 12 week period Chase gained about 4 oz total!  The GI strongly advised me to put him on a hypoallergenic formula.  I said no.  We agreed I would try for another 2 weeks.  I nursed him all the time in an effort to get him to gain weight.  At the end of two weeks he gained another ounce, maybe 2.  The GI came back with words no parent should have to hear: Chase was failure to thrive.  He was falling off the weight charts at less than 5%, he was born around 55%.  She said he was likely

reacting to something else in my diet and we had run out of time to try to figure out what it was.  We put him on an elemental formula called Elecare.  She said “babies who can’t eat anything else in the world can eat this.”  I was heartbroken, at times blaming myself for feeding him breast milk that was making him sick and causing pain.  I mourned the loss of our breastfeeding relationship.  I still cry just thinking about it.

Within 3 days of being on Elecare we again had a whole new baby.  He was happy, he wasn’t crying for unexplained reasons.  It was a silver lining in the gut wrenching decision to stop breastfeeding.  I went through a major fight with the insurance company to get his formula covered.  I had an insurance rep deny us, saying “We think you should really try regular formula first.”  The GI said no way and she supplied me samples of the very expensive ($350/month) formula while we fought the denial.  3 weeks later we got the insurance coverage.

The next day, everything changed.  Chase became irritable again.  He developed a weird, scaly cradle-cap like rash all over his head.  He was fussy eating.  Then, I changed his diaper.  Big, huge, gobs of bright red blood.  What was going on?  I called the GI.  She was on vacation and I saw her nurse practitioner.  I hopped on Google and searched “bloody diaper on elecare.”  FPIES came up. I read about it but didn’t think too much of it.

The nurse practitioner told me to try Alimentum Ready to Feed.  It’s a hypoallergenic formula, but not as elemental as Elecare.  It usually isn’t as good for milk/soy allergies but she felt the only kids who couldn’t do Elecare were those with corn allergy.  A corn allergy?  I had never heard of that! 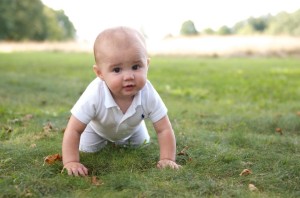 The Alimentum worked, I fought with the insurance company again and got it covered.  We moved on.  5 months old, we were ready to start solids.  The GI advised us to take it slow. She suggested rice first.  He ate it like a champ the first day.  The second day he screamed.  We forced the rice down his throat for a week.  Then, on day 8 when I picked him up at daycare the teachers said he had a “really weird” diaper.  They described it as white and goopy.  I became suspicious.  The weird rash on his head came back, the irritability came back.  On day 10 of rice I commented to a neighbor, “I think he can’t have rice.”  We both thought that sounded crazy.  That night, I changed his diaper and it was once again filled with blood. Then he started vomiting.  Not spitting up, but gut wrenching vomiting.  I kept cleaning him up, not sure what to do.  My husband wasn’t home, my 3-year old was with me.  Chase eventually seemed to exhaust himself and appeared to just pass out asleep.  I now know it was probably the beginning of shock and I should have rushed him to the E.R.

He awoke a few hours later and vomited again.  I knew we had a serious problem. I looked up rice/blood/vomiting on Google.  Again, I read about FPIES.  I decided to ask the GI about it.  Her response, “FPIES, what’s that?  I’ve never heard of it.”  I felt foolish, like a crazy hypochondriac mother.  We agreed to give the baby a week off from food and then try pears, peaches, sweet potatos, carrots in that order.  We tried the pears, within 2 days he was screaming, and vomiting.  It wasn’t quite vomiting like the rice, but it was worse than reflux.  He also developed the most vicious diaper rash ever.  It looked like an acid burn on his bum.  It blistered and it literally appeared overnight.  We decided to skip peaches and moved on to sweet potatoes.  Again, he was miserable, with screaming and vomiting.  I went back to the GI.  She said, “I’m stumped, I need to consult my team.  I have never seen a case like this before.”

That afternoon I called my husband who works at Mass General Hospital.  I asked him to find out who the best GI doctor at Mass General was for this.  We were referred to an amazing GI and allergist who specialize in FPIES.  We got right in to see them and they diagnosed my son as FPIES with the possibility of another rare GI disorder EOE (Eosinophiliac Esophagitis).  We started taking food trials VERY slowly.  We trial one food for 2-4 weeks.  If it is good we move on.  It it is bad we take 1-2 weeks off. 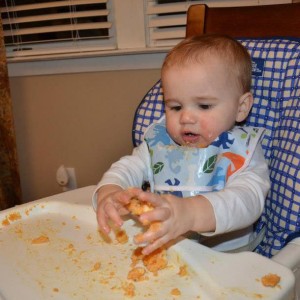 My son is now 16 months old.  He currently has only 3 safe foods and many, many fails.  He can eat summer squash, carrots, and black beans.  It is difficult.  He is old enough now to want the food we are eating.  We won’t go to friend’s houses where food might be lying around.  Our daycare workers have the unfair task of having to watch him like a hawk, and literally take him out of the room when the other babies are eating.  He still wakes several times a night to eat because he is hungry.  But, with the help of our team of doctors, the support of other FPIES families, and the vigilance that is now the norm for my husband and I, he is healthy, growing and back around the 15-20th percentile for weight.  He is feisty and a fighter, but also very loving and playful.

FPIES has taught me to be a warrior mother and we are no long CHASEing FPIES, we are now CHASEing the day when this will all be in our rear view mirror. 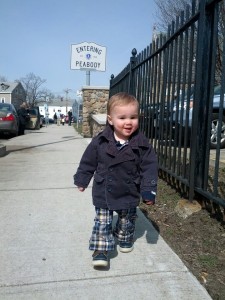 Chase’s mother is Victoria Warren, a reporter at WHDH-TV in Boston.  She lives with her husband and 2 sons in the Boston area.