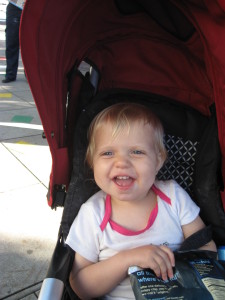 My daughter was 4 months when I started noticing a change in her.  She went from being a happy baby to one that cried inconsolably and threw up after every breastfeeding session.  My doctors thought I was overreacting and just brushed off her symptoms as “colic” or “spit-up issues.”  She continued to get sicker and sicker. She would sleep in my arms at night, as that was her only comfort.

I started my own elimination diet and took milk out of my diet. She started to get a little better but I lost my milk supply. So I switched her to a soy formula and two weeks later, she was swelling like a balloon, the swelling started gradually in the fingers and spread to her arms and limbs over that two week period, even the doctors didn’t notice the swelling at first but I noticed she looked much more puffy in those areas.  Then, she started having blood and mucus in her stools. Still, our doctors ignored our pleas. Finally, I convinced them that this was not normal. Even though the soy stopped the vomiting, it had caused a whole new set of issues.  They then switched us to Nutramigen at almost 1 yr old. The problems still continued and weight gain became her biggest struggle. I insisted on seeing an allergist. After skin test showed a negative result, we started trials for soy. The trial was a fail because she refused to take any more of the soy. They watched her and sent us home. However, on the way home, I had to call 911. My daughter was vomiting profusely and choking on it. The paramedics didn’t believe me either and I followed the ambulance to the hospital. After a few hours at the hospital, her allergist had tests run that confirmed an FPIES diagnosis with a blood panel which showed her white blood cells were very high and her allergist specialized in FPIES and knew what signs to look for and diagnosed her FPIES.  From that day on, it has been a constant struggle with her FPIES to both soy and milk proteins.

As the months went on, she continued not to gain weight and I realized that there was still some soy in the nutramigen formula. At 1 ½ yrs. old, we stopped the formula and tried elecare and neocate, both of which she refused.  We decided to give her fortified orange juice and now at 20 months old, along with her well-rounded diet, so far she can eat all meat, potatoes and most fruits and some veggies. She loves avocados, butternut squash, peas, carrots, and green beans, homemade bread and vegan butter.  Food continues to be the cause of some of the scariest moments in our house, but we are learning to live with it she is starting to thrive and push past her diagnosis. The hardest part for us in this journey is that when you look at her she seems healthy now; but on the inside the food can make her hurt and she’s to young to be able to express those emotions in a way we can fully understand. I hope that we can continue to help our providers and parents to be aware of FPIES so that babies do not need to continually suffer.