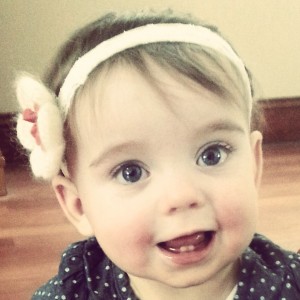 After having a semi normal pregnancy and delivery Macie was born a happy, healthy, beautiful, baby girl. I struggled nursing her, unlike my son. She would do fine for a bit then seem to gasp and seem like she was drowning while nursing. This continued for weeks and weeks I went to lactation consultants and support groups; but no advice seemed to help. Macie was to the point she was required to go daily for weight checks because the little she did seem to eat she violently threw up. After feeling like I was starving her to death I threw in the towel and switched to formula.

This is when everything seemed to get even worse. Although her “silent reflux” was a little better with the help of medication she started with chronic diarrhea. It was to the point she couldn’t finish a bottle without going to the bathroom. So the weight checks continued and test after test continued. Finally we were referred to a GI specialist but around the same time she had to be admitted to the hospital because of dehydration. The GI specialist switched her to an amino-acid based formula after no others worked and she slowly started improving.

Macie still was not “normal” by no means in the GI category so he decided to do an upper a lower GI at around 5 months of age. This of course had her loved ones scared to death. I was so worried she would have reflux while the procedure was happening and all the “what if’s” that they may find. Thankfully the procedure went well and all though she had some abnormalities these were normal with the chronic GI issues she had been experiencing. So we were back to square one, not knowing what was wrong with her.

Around this time we started introducing solids because her specialist felt she could use the extra calories since she wasn’t gaining weight. Her doctors felt cereal followed by veggies would be safer first because of her diarrhea and they also referred us to an allergist. So we started with almost every parent starts with: rice cereal. I of course started it on a weekend because we wanted to video tape her reaction to solids like every parent looks forward to seeing. First bite and she seemed to like it and opened her mouth for more. We gave her more and more excited she loved it so much and suddenly her eyes started watering, breathing picked up, and she turned very pale. Macie suddenly got very cranky so I thought she was getting sick or something and put her to bed. She slept the rest of the day. This continued day after day, I would feed her and she would sleep forever. The diarrhea was back to the chronic point as well as the reflux and after harassing her pediatrician and allergist that this was not a normal illness I got a second opinion.

In the mean time we stopped cereal and all symptoms improved. The second pediatrician agreed that something just wasn’t right and asked that I see a new allergist. The new allergist was sent from heaven! He looked over all her records and really listened to me, promising he would figure her out. We did more skin testing with the new allergist and they all of course came back negative. Looking back I understand why he kept questioning the rice when all the other doctors were questioning the foods causing diarrhea. He told us some things to remove from her diet and to return in one week. I thought “Oh great return in a week so you can tell me my daughter is a freak like everyone else”, boy was I wrong. The very next day (I remember like it was yesterday it was a Saturday) I received an email from the new allergist asking if anyone has ever mentioned FPIES and provided information to read over until our next visit. I read the information and felt a sense of “This is it, FINALLY” we knew what we were REALLY dealing with and all the dots connected!!!!

Since that day we pulled all grains from her diet, milk, soy, and some veggies that trigger problems and she is HEALTHIER! I still get nervous saying that because every time I do she ends up in the hospital or prove me wrong but we are moving forward. We are not in the clear by no means and seem to be dealing with possible immune/asthma issues as well but at least we are headed in the right direction. I know it’s a long road ahead with her only being 11 months old but I am hopeful she will outgrow all this. I am also very thankful she is able to eat the things she CAN eat, unlike some other children I have read about. Now that we have removed trigger foods and started trials again I really feel I have my happy little girl back and as I have always said being “normal” is so over rated!!”