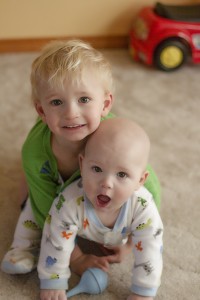 Our oldest son was dragged into the world on June 23, 2010.  Thanks to an unexplained fever and high white blood cell counts, he spent the first week of his life in the NICU.

Little did we know that was to be an omen of how our parenting lives would be.  Unexplained emergencies!!

He had eczema and reflux from birth, but we really didn’t think too much of it – first time parents, after all.  However, at 5 weeks old, he shocked me with 3 blood-filled diapers in a row; he was quickly diagnosed with MSPI (Milk/Soy Protein Intolerance).  I removed dairy and soy from my diet and continued to nurse him, and he seemed much better.

Still, the symptoms remained, albeit reduced.  So he was allergy tested and showed positive IgE to Egg.  After I removed egg from my diet, he truly improved into a normal, healthy baby boy.

As I entered the third trimester during my second pregnancy, I again removed dairy and soy from my diet as a precaution against our second child possibly having MSPI.  Our second son was born May 31, 2012, and the experience couldn’t have been more different!  No unexplained fevers, no complications; he was sent home barely 24 hours after birth with a “perfectly healthy” stamp of approval.

My husband and I breathed a sigh of relief…we had dodged the NICU bullet!

At 3 weeks old, our baby suddenly began vomiting.  He vomited until he had nothing left to vomit, and then passed out on his daddy’s shoulder.  We immediately called the on-call nurse, who asked many questions about his condition and finally told us it sounded like a stomach bug and to keep an eye on his hydration.  She recommended we come in the next day if he continued to be ill.

We didn’t like that answer, but there was nothing more to do.  We kept an eye on him, and the next day he was fine.  So, we chalked it up to a stomach bug and moved on.

Two weeks later, our sweet baby presented me with a blood-filled diaper.  This was alarming, as I had been dairy and soy free since the start of my third trimester and the poor boy had NEVER been exposed to either ingredient in his life!

The pediatrician put me on a “top 8 allergy” elimination diet, so we could suss out the culprit.

Only ten days into the diet, at a mere 7 weeks old, our tiny baby suddenly got very sick.  Sometime during the night, he stopped nursing.  At that time, he was still waking at least twice per night for a feeding, and he just…didn’t one night.  As tired as any new mom and dad are, we didn’t notice until the morning.

He barely nursed after we all woke up, and simply laid there, barely moving, breathing hard, blowing spit bubbles with streaks of brown in them.  He was listless and lethargic, and I knew something was terribly wrong.

After going round and round with his pediatrician and possible diagnosis (intussusception, gastritis, reflux), we ended up in the ER.

Immediately he was diagnosed with pneumonia, plus something else they couldn’t diagnose…but they thought he was going into shock.  The next morning, we were informed we would be transferred to the Children’s Hospital 4 hours away.

After 6 days in the hospital, the best they could tell me was “it was some kind of food allergy”, though his pneumonia had completely cleared up.  I was told to remove 6 things from my diet, handed a prescription for an elemental formula, and sent home.

At his follow-up appointment with the gastroenterologist two weeks later, we first heard the term “FPIES”.  I didn’t know enough about it to even know what questions to ask the doctor!  After reading online about the condition, I became very scared…and very confused.

What the doctor told me to remove from my diet were foods that may or may not trigger an FPIES reaction, but he never mentioned oats or rice and those were clearly two of the top four triggers for an FPIES child!

Thus began my search for answers on my own, which is a scary place to be.  I soon found the other Mom’s and Dad’s in the FPIES Babycenter and Facebook groups, and the FPIES foundation, and thank God for them!  If not for their valuable information and unparalleled support, I don’t know how our family would have survived those first few months.

I placed myself on a strict elimination diet; I only eat ten things, and will only add things to my diet as my son trials and “passes” a food.  So far, we haven’t been able to trial foods, as he has had reactions to: an antibiotic I had to take once when I was sick, a board book he chewed on, the paper from the doctor’s office table that he managed to eat a bit of once, ibuprofen, and acetaminophen.

In desperation, and completely lacking any help from our local doctors, we made appointments in Atlanta with FPIES specialists.  We met with them in January, and for once I was able to ask tricky questions of a medical person and receive a good answer in response!  It made us feel so much better to not be ignored or considered crazy by our doctors!

We have a good plan in place for both our sons (our oldest was recently diagnosed with Fructose Malabsorption) , now, and are hoping that our youngest son can heal up his gut enough to begin food trials by the end of February.

We are at the beginning of this FPIES journey, and I know there will be bumps and setbacks along the way.  Our dearest hope is that we have more success than bumps, and that we can keep our little boy healthy and thriving despite the cruel trick FPIES has played on him.

This is a stressful, scary illness to have for your child, but with the help of other FPIES families, we are coping, handling, and even growing stronger as a family because of it.