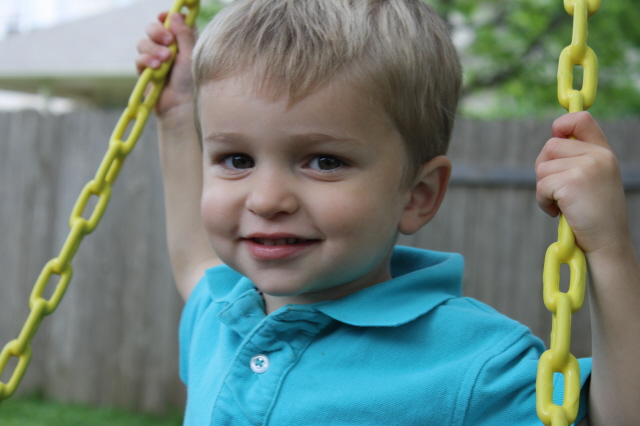 Owen was born in August of 2010.  He was our third child in as many years—Big Brother was three and Big Sister had just turned two.  For the first six weeks our lives were very busy managing our young family of five, but Owen seemed to be a perfectly normal baby.

When he was six weeks old he was almost exclusively breastfed, but at that time we gave him about one ounce of formula.  A while later he did vomit, but big brother and big sister both were sick with a cold and Owen was congested but still nursing, so we attributed the vomiting (and the subsequent diarrhea) to the same virus.  A few days later we tried a small amount of formula again, and again there was some vomiting and diarrhea, but all the advice we were given was that if he was still nursing and urinating, he did not need to be brought in.

That Friday afternoon I changed his diaper and there was a red stain where his urine should be.  We use cloth diapers so it was not any sort of diaper reaction, it was coming from him, and I panicked, thinking it was blood in his urine.  We took him to our nearby hospital emergency room and showed them his diaper.  They tested him for a UTI, which was clear, and sent us home.  They told us he was fine.

The next morning he seemed very lethargic and was not really nursing.  By the afternoon his hands and feet were ice-cold and his lips were blue.  We were advised to take him to the Children’s Hospital, which I did, still completely shocked that I was just at the ER not 24 hours ago and they said he was fine!

I carried him into the Children’s Hospital—still mentally gripping that the other ER said he was fine, so maybe he has a virus but it can’t be that bad because they sent me home, and who would send a very sick newborn home?  However, while still waiting in line to sign in, we were immediately pulled aside, taken back to a room, and very quickly there were about 10 doctors and nurses all around him asking me questions—“How long has he been this pale?  Does he always look like this?  How long has he been lethargic?”  Right then he vomited on the table; they asked “How long has he been vomiting?  All I could say was that I took him to the ER last night and they said he was fine and sent us home.  Looking back, I know the fact that the other hospital sent us home was not worth much, but at the time it was my little bit of hope.  They pushed me out of the room at this point.

Owen spent two days in the PICU and another four days in a hospital room.  My husband and I pulled 48 hour shifts staying with Owen and driving home to care for our other two children.  During that time he was mostly breastfed but given regular formula sporadically when my husband was with him.  He continued to vomit and the diarrhea was constant.  The nights with Owen we did not sleep, we continuously changed his hospital sheets and diapers.  He was tested for everything they could think of, even the really rare genetic abnormalities, and it was all normal.  They could not find a reason for his sickness, but upon learning that big brother and big sister were sick with a cold, they concluded that it was a virus.  He was back to being completely breastfed, he had gained a little bit of weight, and they assumed it was a nasty virus, so we were sent home.  Owen was back down to his birth weight of eight pounds.  I was told to feed, feed, and feed him.  Get weight on him.

The next day, at home, in my completely panicked state, I was trying to feed, feed, feed and I gave him some formula in addition to nursing.  A few hours later he was vomiting again.  I took him back to the Children’s Hospital; I was frustrated, angry, and terrified.  This time they told me that he had a high white blood cell count.  We were checked back in where they ran more tests and repeated the tests they had already run.  At one point I remember asking, “Could it be the dairy from his formula?”  I was told that this did not present as a dairy allergy.  We stayed another week.  They said they would not send us home until they found a formula he could have, and even asked me to stop nursing him for a while to monitor exactly how much he was eating.  He was able to have Alimentum, and after a week we were sent home again.

At eight weeks old, Owen had spent two weeks in the hospital.  He had been tested for everything.  He was back down to his birth weight and was so dehydrated that his skull plates were now overlapping.  The original red diaper stain that first let me know that something was wrong had turned out to be uric acid crystals due to his dehydration.  He had been seen by a metabolic diseases specialist and a nutritionist, had appointments with a neurologist and gastroenterologist, and had been to two different emergency rooms.  No one knew what was wrong with him.

He thrived on Alimentum.  No more episodes, until we were given the okay to try regular formula when he was five months old and about four hours later we were back in the ER with a severely vomiting child.  The same thing happened at nine months old.  The ER staff knew him by name, but still no one knew what was wrong with him.  In this time we did start him on solids and he had no problems with any new foods.  However, when he was ten months old, I gave him some cheese.  Four hours later he was vomiting.  The next day I called an allergist and made an appointment myself.  This was one of the only specialists we had not seen, and after the reaction to plain cheese, the common denominator here was dairy.  It had to be the dairy.

Once I described his reactions—and his extensive medical history telling us what he did not have—the allergist immediately told me it was FPIES.  He was a classic case.  Everything my baby has been through and all of his specialists and endless appointments and the whole time it was a dairy allergy—that was a very emotional day for us.  To have a real answer was an incredible burden lifted.  Until Owen turned two years old we avoided both dairy and soy (precautionary).  All of his food was made from scratch, but we even managed a vacation to Disney World with our FPIES toddler.  Granted, we did take a huge cooler of homemade food with us on the plane, and we did have to cook all of Owens’s meals in our hotel room, but we did it!  Once he turned two years old, Owen was tested on soy and he passed, so now he is only dairy-free.  We are planning to test him on dairy when he turns three.

Owen has not had another FPIES reaction since he was diagnosed.  We still make most of his food from scratch, and there are a lot of outings, events, and parties that we keep him home from in order to keep him safe from accidentally ingesting dairy, but all in all he is happy, healthy, and thriving!