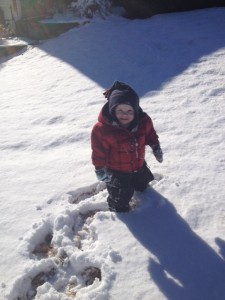 On January 5, 2011, our world changed forever. Our youngest of 4, Ryker (6 months old), began vomiting at the babysitters house. Just thinking it was the stomach flu, I called my mom and asked her to go get him. The babysitter called me 10 minutes later and said I needed to get there ASAP, something was wrong with him. I grabbed my stuff and rushed out the door. Within 5 minutes I was running into her house and witnessing a scene I would never forget. My little baby boy had lost all color and was motionless, with the exception of dry heaving. He looked as though he was having a seizure and was not responding to my touch or voice. I quickly called 911 and he was rushed to the ED. The doctor there explained that she did not know what was wrong and he was in shock. They were going to helicopter him to the nearest Children’s Hospital. My heart sunk. We were devastated.

At the hospital, we spent 4 days with no answers. He quickly came back to us and was his usual feisty self. They sent us home with the only instructions of “if he vomits again, go to the nearest ED immediately”. How scary is that!

When I was finally ready to go back to work the next week, I asked the babysitter to not give him the rice cereal, just to stick with breast milk for the time being. I remember her asking if I thought it was the rice cereal that made him sick. I told her I wasn’t sure but something was telling me it was the cereal. She had taken care of a child in the past with FPIES to rice and put me into contact with that mom. I knew immediately that is what he had and we were diagnosed 10 days later.

When we were at the allergist, Ryker tested positive for over 30 foods by skin, patch and serum. We were told to stick to breast milk only for the time being. From January to April, he was doing great but was slowly dropping down on the weight charts. Every food we tried became a big disappointment. Either he would have a reaction or he would refuse to eat it. We finally had him scoped in August and found out that he had Eosinophilic Colitis along with his FPIES.

In October, with no safe foods, we travelled to Chicago to see a specialist at Lurie’s Children’s Hospital. I remember crying all the way home after Dr. Wershil said that Ryker needed a feeding tube to survive. He had dropped off of the charts at this point with no safe foods. He had even had an FPIES reaction to Elecare- a hypoallergenic formula!! We reluctantly agreed and on October 25, 2012, Ryker had his NG tube placed. Within 3 weeks he had gained 2 pounds! We decided to go with the g-tube and had that placed on November 29, 2012.

The g-tube is amazing! It has saved my son’s life. He has gained 4 pounds in the 6 weeks that we started this path. He has added chicken and potato into his diet with no issues and he looks great! My only regret is that we hadn’t done this sooner. My once tiny baby boy now has dimples!! And chubby thighs!! And a double chin!! This makes this momma so happy!!

Life hasn’t been always a walk in the park with the g-tube but the stress of worrying about how much he is eating has been lifted and now we can enjoy our baby boy. The g-tube has been such a blessing for us and it saved our son’s life!

Follow more of Ryker’s story: The Boy Who Could Not Eat 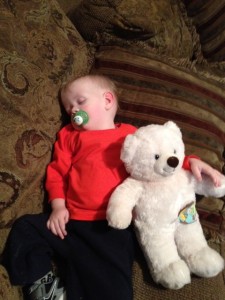