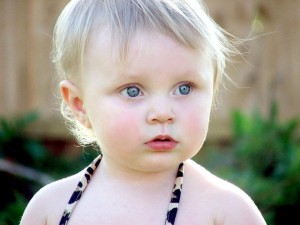 Aurora (“Rosie”) was born 3 days after her due date after a normal and uncomplicated pregnancy. She was born healthy and the only problem we had was getting her to drink her formula (Enfamil) and keep it down, which happened after about 24 hours and we were sent home.

When Rosie was around a week old she got a really bad cold (tests came back negative for RSV, although her Pediatrician felt that’s what it was coming to). After a week or so she started getting better, but her congestion never went away and during the day she was never happy. All my little girl did was cry, all day, every day. After doing some research I suspected reflux, and after doing everything I could at home (smaller, more frequent feeds, keeping her upright, etc) and seeing no improvement, I took her to her doctor who put her on Zantac.

Over the course of several months, we were on several different reflux meds and high doses and still nothing helped.  Rosie was just miserable, I was exhausted and heartbroken that nothing I did helped her…it was a terrible time.  I spent so much time just crying with her.

Her pediatrician told me to put some rice cereal in her bottles to help with the reflux. She had already had some problems with ‘regularity’ so I decided to try oatmeal instead. Now mind you, Rosie has SILENT reflux, meaning she NEVER spit up. But a few hours after every bottle of oatmeal she would projectile vomit everywhere. I had used Gerber brand, which is notorious for cross contamination of dairy/soy, so we tried an organic brand. Same thing. Switched to organic Barley. Same thing.  No more cereal for her.

When she was around 4 months old she was on 60mg a day of Prevacid and still no change. I decided to try a product called Caracream Max. It was a buffer solution for PPI’s I got from the University of Missouri. It was a Godsend.  For the first time in her little life, Rosie got some relief from her reflux. And this relief allowed me to see that something else was very wrong.

With her reflux, Rosie would scream all day and finally pass out at night and sleep halfway decently. When we got the reflux under control, she started waking up every 45 minutes at night screaming in pain. It was most definitely her stomach bothering her. Over the course of her reflux hell we had tried almost every formula there was, even the hypoallergenic ones (Nutramigen and Alimentum) where the dairy and soy proteins were broken down. This did not help her. I assumed she had MSPI (milk soy protein intolerance).

Also around this time we decided to try solids.  Since she obviously didn’t tolerate oats and barley, and I wanted to stay away legumes (soy family) we started with carrots. Again, a few hours after her meal, she would projectile vomit.

We ended up seeing a GI who wanted to have her scoped for EE (Eosinophilic Esophagitis). So when she was 5 months old we drove over 2 hours away for the procedure. Luckily the scope came back clear. Unfortunately, the GI didn’t much care to proceed from there. He told me if she had MSPI the Alimentum formula she was on should be doing the trick. Well clearly it wasn’t. So again, I was left to figure it out for myself.

I feel as if I was robbed of Aurora’s infancy. She is my second child and my only little girl and my last baby. I had so looked forward to cherishing and savoring those precious moments of her being a newborn and infant and drinking her in. Instead those sweet bonding times were replaced with screaming and pain and exhaustion. I completely missed out on that. But after 6 months at least I had my little girl I could finally start to get to know, and what a spunky little thing she was.

Unfortunately, our journey was only beginning.

The next 6 months were spent focusing on food trials. Rosie had a blood test done to test for traditional allergies, which all came back negative (and the Allergist labeled her ‘Protein Intolerant’…off to find a knowledgeable GI!) At first we were doing week long food trials. Rosie was eating sweet potatoes, raspberries, blueberries, avocado, apples, peaches and some sweet potato puffs. At first she seemed fine with these things as we added them in… but slowly her good spirits started to fade. She developed a constant crusty eczema rash on her face that did not respond to any cream. She went from sleeping pretty consistently at night to being wide awake for hours at a time, to waking up screaming. I knew something wasn’t agreeing her, but the question was what.

The only way to find out was to pull ALL of her food. So we started back at square one with sweet potatoes. They went well for a few weeks, I had high hopes. But her eczema started to flare, then she got these cold symptoms, then she started vomiting after her meals. As soon as we pulled the food, her symptoms disappeared. And the same thing happened with white potatoes. Accidental ingestion of a serving of apples gave Rosie the worst case of crusty, oozing eczema I had seen on her.

And so it went. Food fail after food fail. Pears were our last trial and arguably the worst. I pulled them before she got to the vomiting stage, but even so,Aurorahad 15 days of diapers filled with mucus and blood. This was right before her first birthday.

So by the time my Rosie turned a year old she had failed 11 foods and had nothing safe to eat, except Elecare formula. Instead of a cake for her first birthday (which was a BIG deal to me, my older son wouldn’t touch his cake at ANY of his birthdays!) I made her a giant box cake-out of hat boxes decorated with fabric and filled with toys. She LOVED it!! And seeing her chubby little face light up at the cake that was bigger than her was just overwhelming.

A few weeks after her birthday we made the trek toKansas Cityagain, to the new GI. She was finally formally diagnosed with FPIES. What a relief. To finally have the confirmation that I’m NOT crazy was overpowering- it was EMPOWERING. We were told to stop all food trials for 3-4 months to give her insides sufficient time to heal.

So here we sit, just waiting. Rosie is now 14 months old with still no food she can safely eat. Truth be told, it is nice to have this break of not worrying about feeding her something that will make her sick. It’s a terrible feeling, knowing you’re trying to nourish your child and instead causing them extreme pain. I do have to be very careful and watch her very closely…that cheerio her brother dropped? That piece of corn she snuck off the table? The tiny raisin she found under the couch? More damage to system, more nights of screaming and cramping.

It’s been a long year but we have learned a lot. My autistic son learned compassion and patience with his baby sister.  My husband learned that doctors don’t know everything but if you keep pushing and fighting, eventually someone will listen to you. And I learned that as a mother I am equipped to face anything life throws at me. But I think we have all learned from little Rosie that no matter what you’re dealt in life, take it with a smile and keep a dance in your step because life is too sweet  to take for granted.