No one expects to find themselves in the back of an ambulance with their six month old baby during a relaxing Florida vacation, but that’s exactly where I ended up. My husband and I, both doctors, and three other couples, all also doctors, took our kids to Watercolor, Florida, for a much needed week at the beach. That’s where we had our first encounter with acute Food Protein-Induced Enterocolitis syndrome, or FPIES. If you’re puzzling, “What’s that?,” you’re not alone.

The weather was beautiful, the kids loved the sand, and everything was going swimmingly until the third night. I fed my baby, Kate, pureed sweet potatoes for dinner and we tucked our daughters into bed. As I was leaving the room with the baby monitor, I heard a noise from Kate’s bed. She wasn’t crying, but something seemed off—different than usual.

As I approached, I saw that she had vomited in her pack-n-play. I lifted her out to clean her up and she began projectile vomiting. Everything—me, the floor, the pack-n-play, her clothes—was covered in bright orange.

I called for help from my husband and continued the futile effort to clean up a still vomiting baby. That’s when Kate started to lose consciousness; she became pale and limp. My husband picked her up and tried to look at her face, but she couldn’t hold up her head and it lolled to the side. I grabbed my baby and ran to find my friends, the other doctors, for advice. But no one knew what was wrong.

When Kate remained pale and lethargic I realized we needed to go to the hospital. Unfortunately, so far from home, we didn’t know where to find the closest pediatric emergency room. My husband called 911 and off we went in the back of that ambulance, leaving our older daughter asleep at home with our friends.

When we arrived at the emergency room, I tried to convince the doctors that her symptoms were a reaction to the sweet potatoes I fed her for dinner. Everything was just so orange. Because her reaction happened about two hours after dinner, they didn’t agree that the two were related.

Four pokes later, Kate had labs drawn and was receiving IV fluids. They gave her a dissolving tablet of Zofran, an anti-nausea medication, which stopped the vomiting. We stayed in the ER for nine hours waiting for her dehydration to resolve and finally took her home the next morning.

On the way home we were still convinced that Kate’s episode was an allergic reaction to sweet potatoes, but we both went to medical school and, similar to the doctors in the emergency room, we didn’t remember learning about food allergies that manifested with vomiting and lethargy so long after eating. We decided to phone-a-friend and called a pediatrician who confirmed that she likely had FPIES.

She explained that FPIES isn’t a “normal” allergy like we learned about in medical school: FPIES reactions are thought to be caused by white blood cells rather than the IgE antibodies in the blood that cause the more common immediate anaphylactic reactions (like wheezing and tongue swelling after eating peanuts). Around 15% of kids with FPIES have reactions even more severe than Kate’s, putting them in the intensive care unit for low blood pressure and shock (1).

Despite the severity of the disease, FPIES isn’t well known within the medical community and these kids are often misdiagnosed. There is no definitive test or procedure to confirm the disease, so doctors use what’s known as a clinical diagnosis: they take a constellation of symptoms and exam findings to identify affected patients (2).

A survey of pediatricians found that only about half knew of the disease (3). When we took Kate to her pediatrician to follow up and for recommendations on how to proceed, she told us she had never heard of FPIES and would have to refer us to an allergist. The first pediatric allergist we saw knew of FPIES, but didn’t know how to guide or counsel us because he had only seen a few other patients with the disorder. Finally, we were referred to a pediatric allergist at a tertiary care center who was able to help us get Kate on track.

In hindsight, there were signs weeks before that Kate wasn’t tolerating food normally. When I got her up in the morning I often noticed a small wet spot in her crib. I thought she was just spitting up, but in fact she had been quietly vomiting oats—her other trigger—during the night. The orange stains on her sheets after a few dinners of sweet potatoes weren’t the result of a stomach bug; they were the early manifestations of her food allergy.

My new parenting challenge was to figure out how to introduce foods to my baby without making her sick. Which food should I introduce next? Would she develop food aversions or nutritional deficiencies? Would this new food land us back in the emergency room? Even the international consensus guidelines provide information on risk for only a few foods (1). Without concrete recommendations from my doctors, I found myself scouring the internet for information. It was all very anxiety provoking due to the dearth of scientific data about practical management of the disorder.

We began a year long process of introducing foods with home trials. I used the international consensus guidelines (1), The FPIES Foundation website (4), and online forums to decide which food to trial. Kate tried a new food every eleven days. She started with a small amount and increased her intake every day for eight days, then took a three day break, and finished her trial on the eleventh day. No vomiting was a pass—and a win.

Over the course of the next few months, she had a few more reactions requiring anti-nausea medications, but never returned to the emergency department. She now has a healthy, varied diet and isn’t a picky eater. Most kids grow out of FPIES by around age three (1), so she will return to the allergist for in-office food trials of her triggers soon. She also has mild eczema and IgE mediated allergies for which she carries injectable epinephrine.

I am hopeful that continued research on FPIES will provide data-driven recommendations for families like mine, who may find themselves in the back of an ambulance wondering how a tiny jar of sweet potatoes could cause so much trouble.

This post was written by: Laura Benjamin, MD. Laura is an anesthesiologist in Indiana. She is also mom to Anna, 4, and Kate, 2. 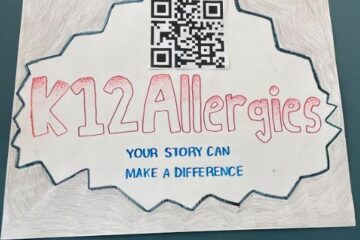 K12 Allergies: Your Story Can Make a Difference 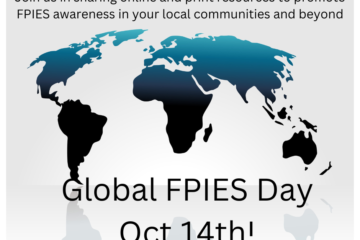 While attending an online event, Aspen Ideas: Health 2022, there was a discussion panel on the topic, “Partnering with Patients Strengthens Science”. One of the panelists, Sneha Dave, in discussing the importance of the condition community, Read more… 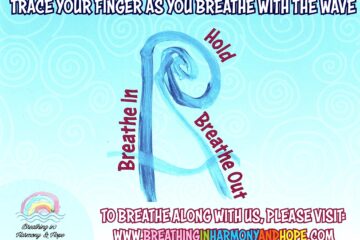 An Interview with Breathing in Harmony and Hope

A few months ago, we were introduced to Kallie and her mom, Rachele.  Kallie introduced us to her breathwork cards and videos.  Kallie is 7 years old and she loves swimming, playing with her friends Read more…